Lets start with the back of the Red Deer marathon shirt: 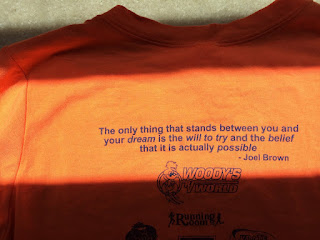 And then the months ticked by.

Finally it was time to get on the plane. Then time to get off the plane. No, the friendly skies are not new and improved; but they have figured out how to avoid cell phone footage. We were all ordered off the plane, then immediately ordered back on the plane, minus one person. But this is a race report so I'll spare you the details. Poor Habs got the text just as she is getting in the car to drive to Calgary.

In Calgary it took nearly an hour for the baggage to come out. I kept waving at Habs through the door. Finally I come out and get a big hug. We begin our drive to Red Deer. It is not that long of a drive. First we went to packet pickup and got 4 packets. When we pull up to the hotel, Jennifer (JWolf) and Colleen (IronCol) are sitting outside. We unload the car and check in. Quickly we meet in the lobby for tea. Ian shows up and we all go to dinner. After dinner, I go to bed pretty early. I was pooped for some reason.

Up early the next morning. At 6, I knock on the door where Habs and Colleen are staying. Colleen answers. Habs is sick. Oh no! Sucks! But she did drag herself out of bed and come to the start. We took pre-race pictures. Colleen's race started 15 minutes before the marathon, so I also got a picture of her running. Oh, and it was warm! Wait, I brought 3 jackets to Alberta because it was supposed to be cold. Now, I'm wearing a shirt. It is hot!

And we are off. I'll say that the course is very very beautiful. Lots of tall pine trees, poplars. River views. Seriously beautiful. I could smell the pine scent. The parts on trails were easy. I ran around an island. But I did feel as if I was having a harder time of it than I should. Could 2,800 feet affect me? I don't know but I kept thinking I was working hard. One time I came off a bridge and passed a sign that said 39k; but I was not even near the half. Disheartening! After the split where the half marathoners went to the finish, it was a very lonely race. I often didn't see anyone either in front or behind me. I had to walk up some of the hills. I went through a forest on a dirt road; and wondered if I was lost. I was glad it wasn't pouring freezing rain like last year or I'd have died. I kept running up through 19 miles or near 31k and then started doing 4x1s. By then it definitely hot and I was drinking 2 cups when I went into the aid stations.

At the end of this race is a very cruel hill. I had to walk up it. I told one volunteer it was cruel. He said, laughing, "you don't have to thank us for it." The next volunteer just told me to be sure I went around the cone, and supervised that I did. Then it was down hill the last 0.5k into the finish. Jennifer was the first one I saw cheering. I got choked up as I was glad to have finished. I actually put alot of effort into the race. Then I saw Habs and Colleen.

Habs took this picture. Colleen also took a picture but Habs photobombed it so I'm not posting it. I finished in 5:08.xx ( one too many hills walked to beat 5 hours). 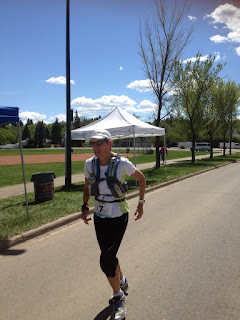 As soon as I stopped, I realized it wasn't that warm. Habs had my fleece and I immediately put it on. We went into the gym to watch the awards because I an got one. And they ate apple pie. Then Colleen and Jennifer headed back to Edmonton. I showered in the hotel and then Habs and I headed for Medicine Hat. After passing Calgary, "el sicko" decided she couldn't drive. So I drove to MH, but I behaved myself (not driving like a Texan). And my poor hostess really tried hard to feed me but in the end, I had to make my own dinner. Mr Habs and Habs daughter were also sick.

The next morning, Habs was up before me and feeling much better. She even texted me to get up! I got to sit on her porch and read my spiritual book: 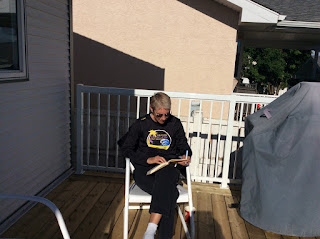 After coffee and breakfast, we went to see all the places Habs runs. It turns out that she has many awesome routes. (I can't remember all the names).

For starters, just an appetizer mind you, we walked from a hill down to a camp ground. I learned what a coulie is. I had always thought of them as 20 foot dips. But really, they are huge and the cause of many steep up hills. When we got to the campground Habs wondered if I wanted to keep going. I declined since we had a long climb back up to the car. 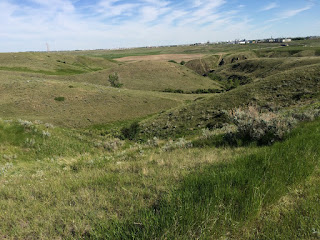 Then we drove to another park, the one that Habs has posted some very beautiful pictures. It has an old coal mine. She showed me how she does her 3k loops, which include a little hill. Then she wanted me to walk up to a lookout point. Gulp! It was way up there. But ok, I'll do it. After a long long climb, we are at the overlook. Ummm, Habs, we could have driven up here! By now we are past 5,000 steps on her fitbit. 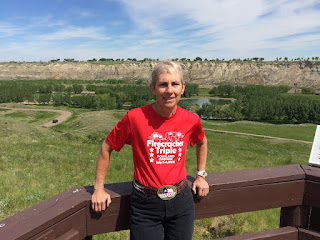 We go back to Habs house for lunch. Then we go to the Goat trail. I really wanted to see this and I was impressed! Very very steep.

Picture from the top of the Goat trail: 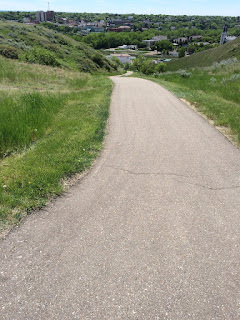 Then we went to another park below a teepee. Habs asked if I wanted to walk up to the teepee. Um, no! I finally said uncle. Habs said, "YES!" She broke me. But still, I got shown Cemetery Hill and Police Point park. Seriously, Habs is very strong to run all these hills.

Then we went a collected Mr Habs and drove to a park that was about 80k away. It was where they did their trail race. We wanted to take a short hike up a small mountain, but the park was swarming with trillions of black flies. I'm not kidding. We were in a cloud of flies the whole time there.

Here is a picture of the flies: 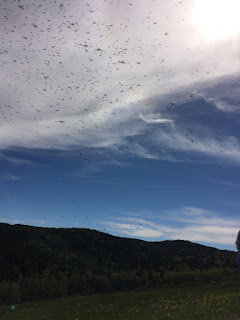 I couldn't keep my eyes open due to the flies. 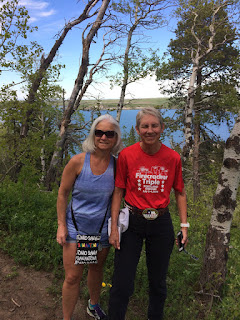 We got past 10,000 steps! Poor me, run a marathon and then spend the next day climbing steep hills! That Habs!

Fabulous report. Nice race. I'll have to consider this race sometime in the future. I don't believe for a moment that you became "broke" - bent a little maybe!

Nothing will change if you never choose.

Great report, good racing, terrific pictures! Thanks for the little glimpses into Habs' world, too.
"We are made of dreams and bones."
--The Garden Song

Great weekend report. It was such a pleasure having you and you were a great sport on the hills the day after a marathon. I agree about the flies, they were horrible.
I wanna live like there's no tomorrow
Love, like I'm on borrowed time
It's good to be alive, yeah....Jason Gray

Great report! Nice to read about your reflections on the weekend.
Very nice to meet you again.
Support me in my fundraising for the Boston Marathon, Boston Public Library team:
https://www.crowdrise.com/o/en/campaign ... iferwolf11
Top

Thanks for the report. Habs, your hair is long!!

Is "porch" an American/Texan thing? Habs always calls it her deck.

I say, "front porch" and "back deck."
"Maybe I will be my own inspiration." - UltraMonk (Laura)
"Everywhere is walking distance if you have enough time." - Steven Wright
Top

Porch is probably a California thing.

To me, a porch is covered (and sometimes enclosed) whereas a deck is not.

ETA:
porch (noun)
1. an exterior appendage to a building, forming a covered approach or vestibule to a doorway.
2. a veranda.

deck (noun)
an open, unroofed porch or platform extending from a house or other building.
"Maybe I will be my own inspiration." - UltraMonk (Laura)
"Everywhere is walking distance if you have enough time." - Steven Wright
Top

Oh, and I'm not correcting you. Just curious as to word choice since there's so much variation (even within Canada).
"Maybe I will be my own inspiration." - UltraMonk (Laura)
"Everywhere is walking distance if you have enough time." - Steven Wright
Top

Porch is probably a California thing.

Not really. I have always called a porch as such whether front, side, or back. We had a back porch on our farmhouse.
Top

Run the mile you're in. Not the one behind you, and not the one in front of you - the one you are running now

Great trip...full of fun and memories. Oh, and a race as well.
Nicholas

Events in 2018
Walking, Yoga, Soccer scrimmages and whatever else I can do
Hip replacement on September 10....now doing a variation of the None to Run plan
Top
Post Reply
14 posts • Page 1 of 1

Users browsing this forum: No registered users and 10 guests