We want to hear the good, the bad, and the ugly!
Post Reply
58 posts

I love ATB, 4th time here, 1 Bronze and 2 Silvers, 30k has always been a great distance for me, and these hills have always gave me a boost.

My goal was 1:59:59, no secondary goal.
Training was going very well, but I still wasn't sure I could hold a sub 4:00 pace for 30k on flats with no wind, but with wind, rain and hills I knew it would be a big challenge, if I ran a great race I thought it could be close, and I maybe had a chance.

Got to Copps early, socialized best I could, then went out to warm up with ShaggyTour before the race (he also had the same goal)

Took off banging out 4:00 min kms easily for the first 12k (10k 40:08 ) ShaggyTour dropped off somewhere around here. Crank Dat Soldier Boy was running through my mind at this point. I was running with another guy ShaggyTour knew for the next while. He was looking strong, but then fell off around 17k. Around 15k (1:00:24) I was feeling as if this was starting to get tough and had fallen back a bit further on my goal. That feeling passed quickly as I got closer to hills, my energy came back and I was motivated again to attack the hills.

I hit the hills on my own, the song "That's Not My Name" by the Ting Tings in my mind and was passing guys easily, I passed the third place woman climbing up to Plains Rd. Another guy attached on to me as I passed him until just before the big hill. He thanked me for pulling him along and telling him to suck it up

Up the hill and recover quickly, and push hard for the rest, I know I'm close, I passed the 2nd place woman at 29k and it appears I have a bit of a cushion (30s maybe a minute). I keep hammering hard just in case, sprint into Copps and see the time clock!! 1:59:49 what the!!! I started straight out sprinting to the line, crossed under 1:59:58, and gave them the classic double arm bicep pose. I'm the last guy with a gold medal this year. I did get chicked but she was from Kenya, does that still count?

Now McMillan thinks I can run a 2:52 Marathon

where does the insanity stop!!

However it doesn't matter how fast I run, I still come home and need to clean up poop.

eta:
I did a little digging, this year was the lowest number of Gold medals handed out to males in the last 11 years, I couldn't get race results further back then 1999. 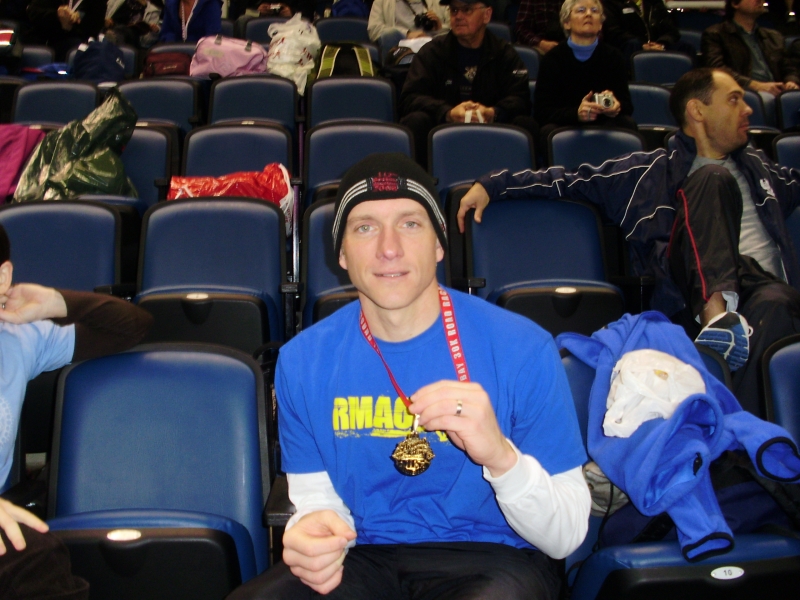 "I just hope that people look at it and say, 'Hey if this yahoo can do it, then I can do it too.' That'd be cool if people thought that. It's just a matter of putting the miles in and working. It's not so much how much talent you have. I hope." - Brian Sell.

"To give anything less than your best is to sacrifice the Gift." - Pre
Top

well done! i think we need the details of your entire playlist. i am sure that music is the only thing keeping me from running like you.
******
2010 - gone viral?
2011 - mitochondrial mystery tour
Top

Holy Smokin' Gold Batman, err Robbie-T ... Loved the grin on your face with that shiny gold medal around your neck at Copps after the race ... Congrats, Big Guy .... You smokin' and rockin' .. and continue to amaze me with all your achievements over the past couple of years ...

What can you say? Outstanding, you're a class act, the real deal, the hardest working man in show business. Still I wouldn't have bet money on this. How are you gonna top that? Now wipe that grin off your face and clean up those diapers, more on the way!
Last edited by Doonst on Sun Mar 29, 2009 10:10 pm, edited 1 time in total.
next up:

Great run, Rob!! You have come a long way in a short time and it just keeps getting better. A gold at ATB is no mean feat and one to be honoured and cherished.

That was Liz McGuire you passed in the home stretch. She's been training with Frank (tallrunner) here in Ottawa. No mean runner in her own right....
Nicholas

Events in 2018
Walking, Yoga, Soccer scrimmages and whatever else I can do
Hip replacement on September 10....now doing a variation of the None to Run plan
Top

Your splits rock ….. the consistency given the changes in elevation and the wind are amazing. I couldn’t get results like that on a treadmill!
http://westgreyrunner.blogspot.com/
Top

Nice work, once again. I like the idea of having only one goal.
"The body is a serveant of the mind"
Top

Simply amazing! I tried to keep up but it wasn't to be. Back to the track for more training. I was very happy to see the gold around your neck as the other gentleman that ran with you until around 17k told me he was in for silver and you both looked so strong as I faded. That is one tough run so to hit the goal without much of a cushion heading into the hills just shows your awesome conditioning.

"Wherever you go, there you are."
Top

I am simply in awe at your improvement curve-- when will it stop?

I did look at the kilometre splits on itsmyrun-- what a metronomic pace... are you sure you didn't doctor those splits?

Nice, can't wait to see the pictures. I'll tell Liz it was you who smoked her at 29k. Marathon? I thought his was a year of short races

Help Fight Children's Cancer with Sears Canada and GoodGuysTri - 26 Team Mates, All Running 100km, 1 Goal.
If you have the time please read my participation page and consider a donation.
Top

you are a machine. super run on a tough day. as long as you didn't get any pop on your gold medal it's all good

Great job! I saw you to but didn't get a chance to talk to you. I hope to read about that 2:52 marathon sometime.

I never waiver in my faith in you as to what you can accomplish! You are a machine! You set a goal, and you go out and do the work that needs to be done to giter 'er done! (In machine-like fashion!)

Congratulations on the gold!

I wish I could have seen the medal post-race, as seeing it around your neck is the closest I will ever come to one!
http://connect.garmin.com/profile/trixiee14

Why fit in when you were born to stand out?
~ Dr. Suess~
Life is short. Drink the good wine first!
Top

I know there was a whole lot of maniacs watching out for you!

I saw you in section 122, but I never got a chance to introduce myself.

Enjoy that GOLD medal! (as she sheepishly looks at her bronze

Wow. At the start of the race, hearing about the weather, I figured that this was going to be the sort of day where aggressive goals stay out of reach. Wrong. MacMillan is right -- you definitely have a 2:52 marathon in you, but unless you're really wanting a NYQ right away, it can wait.
Top

Robbie-T wrote: I did get chicked but she was from Kenya, does that still count?

However it doesn't matter how fast I run, I still come home and need to clean up poop.

Technophobe Extraordinaire
"Princess" J0-JO...The Awesome Running Machine.
"a precious, unique and quirky individual"...definition given by a Toronto Cop
An Ever Loyal and Devoted Official Doonst Fan.
"In the midst of winter, I finally learned that there was in me an invincible summer" -Albert Camus
"Keep Going. Never Give Up." Spencer
Top

The very first thing I asked DH was how you did....he was in more awe, moreso after I mentioned your incredible journey.
Congrats Robbie, you are an inspiration to many people. Your dedication to training your abilities further and knowing how far to push yourself is the sign of someone knowing his body and sport.
I know that even faster times will be in your future.
Enjoy!!!
Cheers,
Jill

Wow! I had no idea what your time goal was (gold) but would have believed it possible no matter what, 'cause if Robbie-T says he can, HE CAN! Very impressive Rob!

Huge congratulations on Gold!
Treat a child as though she already is the person she's capable of becoming. - Haim Ginott
Keep going. Never give up. - Spencer Dolling
Run like hell, feel like hell, look like hell! - Nick
It's not having what you want, it's wanting what you have. - Cheryl Crow
Top

Well this just proves that you are, in fact, a machine.

Holy carp Robbie! WOW! Way to go. Ummm.... I don't think the insanity will ever stop with you Maniac. I think you should change your middle name to insanity. Smokin' fast man.

Users browsing this forum: No registered users and 4 guests