I decided to register for this marathon for two reasons. It fulfilled my desire to run interesting events and a marathon using the iconic Route 66 as part of the course fit that requirement. Also we could then stop off at Branson, Missouri on we way home and catch some great music shows.
We had an uneventful drive out to Tulsa and I had a couple of days of easy workouts to get ready for the marathon. On the Saturday, we went to the expo. Packet pick up was well organized and the expo was quite large. Instead of a race shirt, they gave us a light jacket. I was able to get a Nathan Head Lamp for a reasonable price at the Expo. I was also able to chat to my friend Bart Yasso for a few moments.
On race day, it was quite cold with a wind chill of -5 C ( although the winds were light for the first half of the race ). I drove downtown and found a parking spot about half way between the start and finish areas. I walked over to the Marathon Maniacs VIP area but it was still in the open so I returned to the car and waited there until shortly before 8 AM.
The race went pretty much as I expected. I had no real goal time. I decided to run as comfortably as I could while maintaining a reasonable race pace. The half marathoners and full marathoners started together and as there were over 10,000 of us things were congested for sometime. Thus I started running at the pace of those around me. I had started in Corral B which was composed of runners expecting a finish of 5 hours or less. ( There were four corrals ). We ran the first few miles at about a 10 minute per mile pace. The route is composed of hill, hills, and then more hills. I found this to be somewhat challenging in the first half and more so in the second half. I quite enjoyed the first half despite the rolling terrain.
I reached the first half mat in just over 2:15. As the half runners left us just before mile 13, there was open space to run for the remained of the race. However, it seemed the hills were longer and steeper in the second half. They were wearing me down somewhat so I changed from my 10 and 1 strategy and went to a 4 and 1 pattern. I also did a bit of extra walking on a couple of steeper inclines. In addition, the winds picked up to about 25 miles per hour with stronger gusts. I pretty much felt okay but the legs were telling me that I was not completely back to my pre injury conditioning. As I was slowing a bit, I took the opportunity to connect with the volunteers and wave to the bands playing. It was chilly enough throughout the race that I wore my light wind jacket from start to finish.
It was great to be greeted by name by Bart Yasso as I neared the finish line.
Final chip time was 4:49:25 and I finished 2/6 in my age group. I was not nearly as wrecked as I was a few weeks ago at the PEC marathon. Although the legs were very fatigued, I was able to get out the next morning and get in a recovery jog/walk. I also ran a 5K Turkey Trot in Branson, Missouri on Thanksgiving Day in under 30 minutes.

I must say, this is a well organized and fun event but the course is very challenging!!
Top 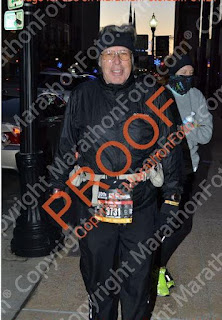 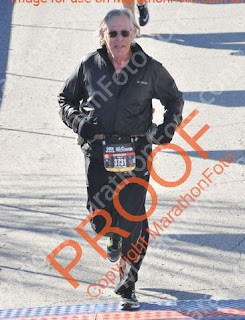 Thanks for the report.

Thanks for posting the pics, Laura!!
Top

Way to go! Congratulations on another one done.
Top

Nice to see another one under your belt! Congrats!

Congrats Ken, you are on your way back! The jacket is a nice change over the T-shirt too.
Top

Nice one Ken, you just keep truckin' along,
I wanna live like there's no tomorrow
Love, like I'm on borrowed time
It's good to be alive, yeah....Jason Gray

Congrats, Ken!
"Maybe I will be my own inspiration." - UltraMonk (Laura)
"Everywhere is walking distance if you have enough time." - Steven Wright
Top

Congratulations, Ken! Good job through the chills and the hills.
"We are made of dreams and bones."
--The Garden Song

"I am always doing that which I cannot do, in order that I may learn how to do it."
--Pablo Picasso
Top
Post Reply
11 posts • Page 1 of 1

Users browsing this forum: No registered users and 10 guests